The Pols & Czech Rep (H16/H5) have an Def Pact w/ Rus since early in server so they must join them in war vs Germs, which they have.

German houses and the polish had a non agression pact which was dishonoured by the polish houses ( the declared war with no delay time ).
Their attack was repelled and the germans advanced after this.

The turks tried to break free from the russians but then simply fades away as the seemed to avoid the fight, maybe they are now russians too?

i see the Russians have gained some counties in France too now, anyone know whats happening?
Top

The Turks lost the war against Russians, France is now under H14, Spain is under H19 and we have no update here..
Top 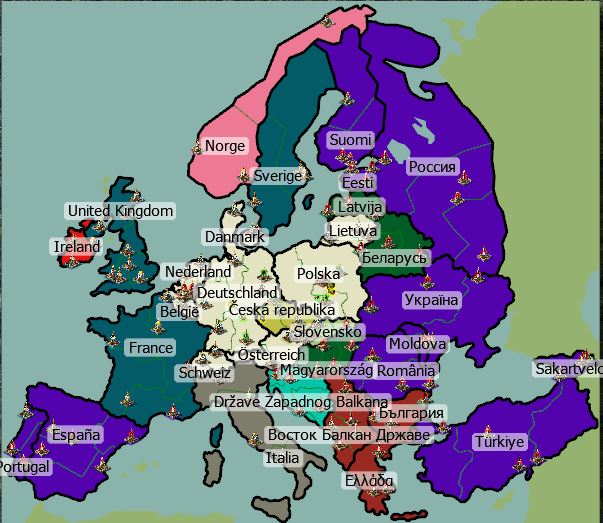 The leaders of the several houses in the Western Alliance have done their typical MO of abandoning their houses/factions to go play on a new world (the Wolf World). They are like a pack of undisciplined hunting dogs that are always losing sight of the true prey because they're distracted by a passing squirrel . . . sad bunch really.

When will people learn to stop letting these jokers head houses or flocking to them? It's all smoke and mirrors. They spend a load of money coming out of the gate on every world, rank up to crown prince so everyone on the server can stand and worship their awesomeness but then always do the same thing . . . . jump ship . . . they rarely last beyond 100 days. They aren't leaders, they are a bunch of narcissistic control freaks with ADD.
When injustice is law, resistance becomes duty . . .
Top

Current diplomacy: H-11 vs all houses minus H-9 and H-1. It is truly sad to see so many in the west give up. Fact is we have been fighting the "MEGA HOUSE" of the Russians and I will tell you it is quite pathetic. If any group of people came to this world who knew how to play and invaded Russia or Ukraine they would see how brutal their castles are. Over 70% are walk-ins. Fact is we need bodies. The most ridiculous thing is that H-19 joined the war against us to "Even the odds" as we were fighting H-13 and H-6 with H-10 and 9. Which makes sense to me, but then H-10 fell apart and the wolf world opened and H-9 pretty much fell apart. So now it is H-11 and the neutral German factions fighting all of mother Russia alone. H-19 claims to like to see a fair fight being played out but clearly that is not the case. Then H-14 decided to join H-19 which absolutely blew my mind lol That was when I knew that I now have 0 trust at all for anyone in this game. Literally people who I played with for over a few years totally abandon us. Sad thing is they are some of the best fighters I know and yet they just hide from them by joining them. H-19 has killed the server however here in H-11 we will not be giving up the good fight.

To all of the sister houses of H-19, you could crush H-19, REVOLUTION! It is not like you all will fit in H-19 when you help them win the glory age anyways. They are going to * you all over other than maybe a select few. So enjoy fighting their wars for them and being their *.

"By union the smallest states thrive. By discord the greatest are destroyed." - Sallust

TheKRAKEN wrote:It is truly sad to see so many in spain give up. H6 has killed the server. REVOLUTION! It is not like you all will fit in H3 when you help them win the glory age anyways. They are going to * you all over other than maybe a select few. So enjoy fighting their wars for them and being their *.

You are the ones who killed EU1, nice try. Just LOL @ throwing over 300+ players under the bus.
Top

H11 seems to be the only house actively fighting the Russians atm (along with a handful of independent factions) . . . all others that haven't fled this map appear to have jumped on the H19 bandwagon headed straight for Farmville . . . either that or they are hiding out in an allied house or one neutral with H19. People get sooooo attached to their pixels lol
When injustice is law, resistance becomes duty . . .
Top
Locked
126 posts