If you’re new to Stronghold Kingdoms or have a question about the game, check here for useful advice.
Post Reply
2 posts • Page 1 of 1

Was curious about a game rule for the upcoming Domination 4 when I noticed something strange while briefly reading over.

"New Rules
At the core of the Domination World are the new gameplay rules which will differentiate this world from the previous domination world:

This World will be limited to 91 days, after which the world will end."

But, on the announcement for Dom 4 being released on the SHK client news, it says the following:

"180 days later this world will forever close its gates, with those of us deemed worthy generously rewarded for our strategic cunning! A bundle of valuable prizes will be handed to each Lord and Lady placed in the top 10 of any leaderboard at world end. The winning House will be showered with prizes, and its members immortalized in the Hall of Legends! With no Glory Rounds the winning House will be determined by the total Glory generated during 180 days of brutal warfare."

Will Domination 4 only be limited to 91 days or 180 days? FF please clarify 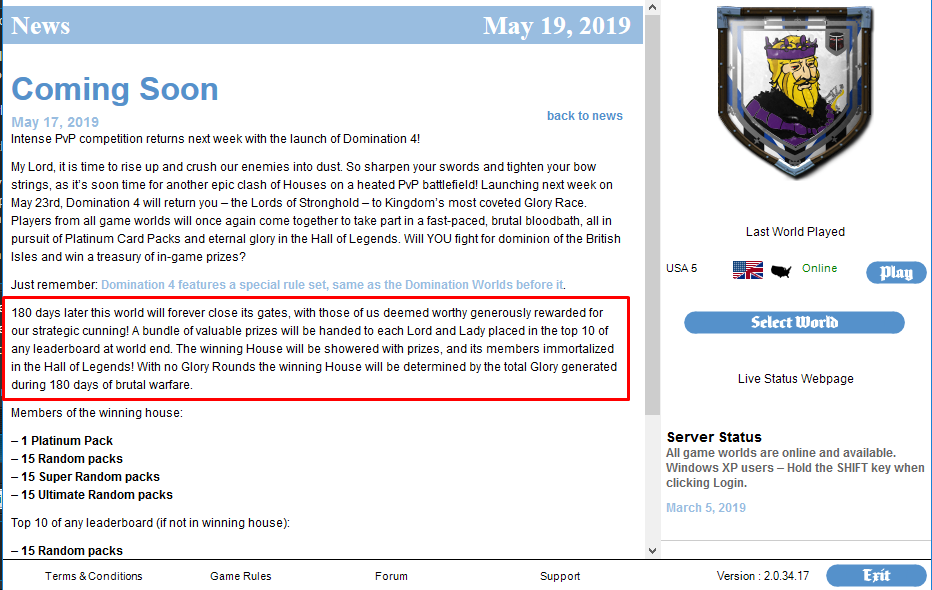 Take everything I say with full intention that I'm being sarcastic.
Top

I see the announcement on the client has been changed to 91 days.

Thanks FF!
Take everything I say with full intention that I'm being sarcastic.
Top
Post Reply
2 posts • Page 1 of 1