Important announcements and patch notes will be posted here.
Forum rules
Please do not start any New Topics in this Forum.

This Forum is only to be used for News Posts related to updates and any other topics will be removed.
Post Reply
115 posts

People like you davidspy talk as if they are important people who have been through everything and desides what is right for shk. You have no right to talk like u do all u have done in this game is farm in one area since age1 and have done nothing to support anyone but yourself. Since the last great war of w5 you done nothing but talk about ending servers and closing worlds cause of its inactivity. We players who actually love our worlds have put in alot of effort to keep the worlds as peaceful as we can so that players like you can have a place amongst it. Thoughs that talk about closing worlds do not care about others they only care about themselves and want these petty prizes they think will make them feel better or the fact they want to * everyone off and end the game on thoughs who actually want to see the game world expand and prosper.

There will be nothing left of this game withen a year because of arrogent people with no visions for the future.
Top

I like the idea of a final victory i do but it should not be about closing the worlds. It should just say there will be no new ages for that world. giving players the opportunity to close worlds is wrong, that sort of thing should always be in fireflies hands not players.
Top

Avanti One wrote:I like this. A LOT.
I would like it EVEN MORE if the winning house can just remain there, farm for the rest of eternity, oh wait....

but seriously, there should be like a "Golden Land" mode where people live in peace until they die of old age like you hear in the stories.

The server should remain up until the last survivor of that war takes his last breath, reminiscing the old days.

Only the land itself shall remember the heroes who once roamed here.

Correct me if I am wrong but I am almost positive that you guys let us vote on if we wanted this/liked this idea and everyone voted against it. 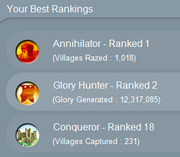 YungBlood wrote:Correct me if I am wrong but I am almost positive that you guys let us vote on if we wanted this/liked this idea and everyone voted against it.

At your request I am correcting you.

DekeYoungAtlanta wrote: 69 for 111 against and 14 not sure was technically a majority, but in the bigger picture only 194 people responded to the survey. As time when on the percentages for those opposed declined. I also did some analysis and found that more of the votes against were cast by players that are not active on UK-1 or UK-4.

The forum interface is limited. If it were my company I would have indexed the votes cast against factors for 5th age activity and crowns purchased.

Players have been leaving the game regardless. I do not see the publication of 6th/Final age rules as increasing the attrition rate. I personally project that if Firefly had not announced an end game that more players would leave UK-1 and UK-4 due to boredom then the vocal few that claim to leave do to dissatisfaction with the changes.

It was a "poll" done on the forum asking for feedback and only 194 people bothered to click on a vote button. Fewer more posted comments.

The tendency is for players in the "never close worlds" camp to claim that everyone voted against closing worlds. This was not the case. There was no clear mandate from the player base.
Top

it should also be pointed out that there were lots of posters that had totally new sign up dates and/or less than 5 posts that were almost universally against the idea. what that tells me is that active players and ones that are at the core of the game and take time to participate on these forums were not the ones against it. that should count for something as well.
Top

Yeah, this topic is starting to sound a lot like the EU referendum that we're having in the UK.

Lots of BS derived from meaningless numbers spouted by deluded advocates who seem to believe that they know what's best for other people when they've only got their own self interest at heart...

I would like to point out strongly something important many of the complainers seems to be missing.

You can prevent the world ending by dominating that world and choosing not to end it by not pressing the button, you can even prevent it by just holding to 1 tower to prevent those who want to end it from being able to do it.

keep the towers from reducing in every glory round then it would be okay to have that. Eventually someome will wait till there is only a few towers left then login and fight were the last few towers are and close the game without giving anyone the oppritunity to defend against them. Rouges fight destroy and then leave thats what they do. Its up to us active players to keep the game going and this update is clearly ment to destroy the game instead of making progress
Top
Post Reply
115 posts