Lord Alacrity wrote:I am deeply sorry for any confusion caused by the errors in the original posting. Due to an unfortunate miscommunication, what was originally posted did not reflect the accurate values for the prizes. As a gamer myself, I can understand the natural frustration felt by players when the early information released differs from the final implementation.

While the mistake was noticed early and quickly corrected, I would like to sincerely apologize to any players who feel slighted or misled. While the incorrect prize values were exaggerated the actual prizes are the most generous that have ever been offered in the history of Stronghold Kingdoms and represent a substantial reward to be claimed if the players on a world should choose to do so.

They are still explained incorrectly on the German news post, e.g. 10k card points for Silver... 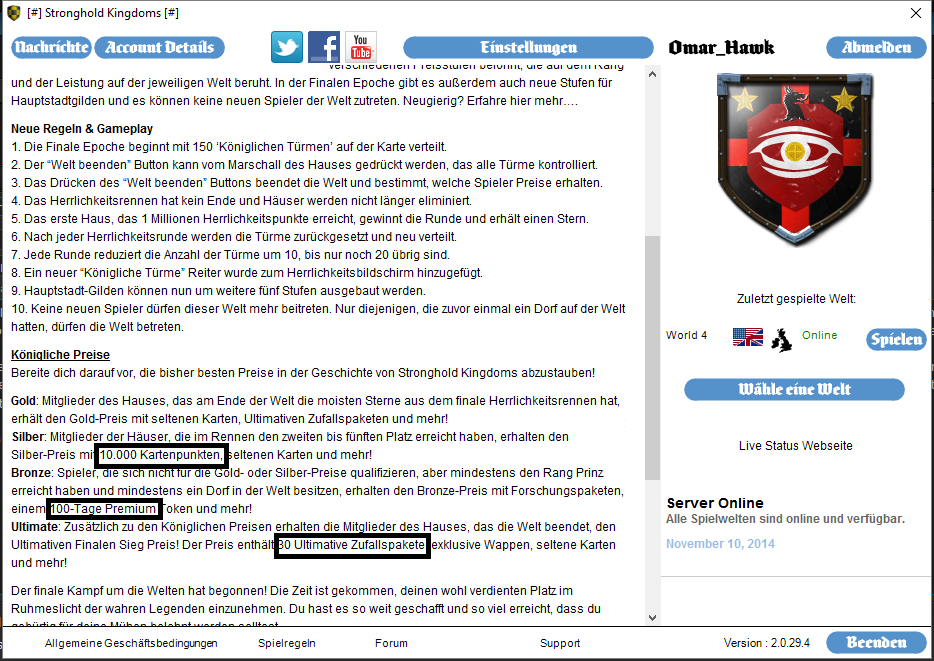 Would have ben nice, if you made a news post with a correction of the values instead of silently updating the values hoping noone will notice...

by warlord1799
you have to be in a house to receive any prizes at all? or is there going to be rewards for crown princes too?

one you can have people actually vote on the changes being made instead of just doing them yourself. you can actually give players more control by keeping out of diplomacy and changing the way the games played. yes we get updates are needed but doing them the way you guys do is pathetic and just plain ignorance. informing people at the right time of major changes is also key in making the game great again. listening to suckers who dont give a rats * about anything degrades our respect in firefly even further. if you want to change things talk about it first to everyone not just thoughs who are active in forums.

in the end i dont give a sht anymore what developers do. its obvious that this game "to them" belongs to them not us. which in all since it does belong to them but i thought that they wanted to give power to the "players" (quoted because they gave power to a player instead of everyone) not them.whatever though i know im bummed out about alot of things and people dont take me seriously but i know whats * when i see it and i dont back down from bullies or let people walk over me. yall do what you want this game will never be like it was.

by DekeYoungAtlanta
World 4 is in the last week of the 6th age. The Final age is just around the bend. I am looking forward to seeing where the Royal Towers will be placed.

by Cripper2
Are the silver prize houses going to need a glory star to get the prize or is it going to be based on some other metric? I am led to believe told on world four h17 are going to move players/factions around so that all the allied houses get a glory star before they end the world

by DekeYoungAtlanta
Last Glory round of 6th Age ended on Saturday. No notification of Final Age rollover from Firefly yet.

by Midila
It's over good people!! House 17 world 4 just took all 150 royal towers. About 4 days into the final age!! And pushed THE Button.

Congrats to all involved and thank you for the good fun!!

Midila wrote:It's over good people!! House 17 world 4 just took all 150 royal towers. About 4 days into the final age!! And pushed THE Button.

Congrats to all involved and thank you for the good fun!!

Now to see what happens next....